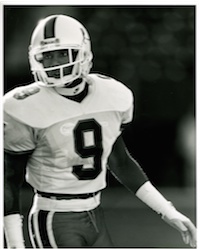 Chad Wilson is a former college football player for the University of Miami and Long Beach State University. He played two seasons for the now defunct Long Beach State 49ers football team. Wilson was the only freshman to start in the 1990 season and was the first freshman to see playing time in a game for the 49ers since 1985. Following Wilson's sophomore season with Long Beach State, the University decided to terminate the football program. Wilson was recruited by every top college football program in the nation including the University of Miami and former head coach Randy Shannon. Wilson spent three seasons with the Hurricanes playing from 1992-1994. He started 13 games for the Hurricanes, played in three major bowl games (Sugar, Fiesta and Orange) and was named All Big East his senior season. At the conclusion of his senior season Wilson signed with the Seattle Seahawks as a rookie free agent.

Wilson grew up in Pembroke Pines, FL attending Cooper City High School for his first two years. Following that, he attended Canyon Springs High School in Moreno Valley, CA. Wilson started one season for the Cougars at both running back and cornerback. During his senior year he earned All Mountain View league, All Riverside County and All California Interscholastic Federation (CIF) Honors his senior year. He was the Riverside County All Star Game MVP in 1990. (See Wilson's highlight video). Wilson was recruited by San Diego St, UNLV, California, Arizona, Cal State Long Beach and others during his senior season.

Wilson coached football for 15 years most recently as defensive coordinator / defensive back coach at American Heritage High School in Plantation, FL (2015-2017).  While there, the Patriots won back to back state championships (2016 & 2017) and boasted one of the top defensive units in the entire state of Florida.  Wilson was priviledged to coach such top prospects like Pat Surtain Jr.,(Alabama), Tyson Campbell (Georgia), Nesta Silvera (Miamii) and Andrew Chatfield (Florida). Prior to that, he was an assitant coach and coordinator at University School in Davie, Fl for six years (2008-2013) where he was the defensive coordinator of the 2012 state championship team. Prior to University School,  Wilson was an assistant coach and coordinator at Archbishop McCarthy High School in Davie, Florida (2007). Wilson coached Youth Football at West Pembroke Pines Optimist from 2003 to 2009.

Wilson is the host of the GridironStuds Show, a featured radio show on BlogTalkRadio.com that focuses on issues and topics in the world of high school football, college football, college football recruiting and professional football.  You can listen live to the show weekdays at 10 AM est. or listen to archived shows by visiting GridironStudsShow.com.